Our Master/slave Journey blog is a window to our travels, our experiences, our thoughts as we walk this Path of Master and slave that we are called to. It’s been a wonderful, crazy journey, and it’s just begun… Join us as we blog daily.

Our Homes Away From Home

There are times when I will sit on an idea for a little while and chew on it until I realize what I need to say. Lately, this has been happening a lot as I read things on the web, twitter, or hear conversations between friends or at events, especially in regards to the skills and characteristics of what we’ll call the D-side or M-side. 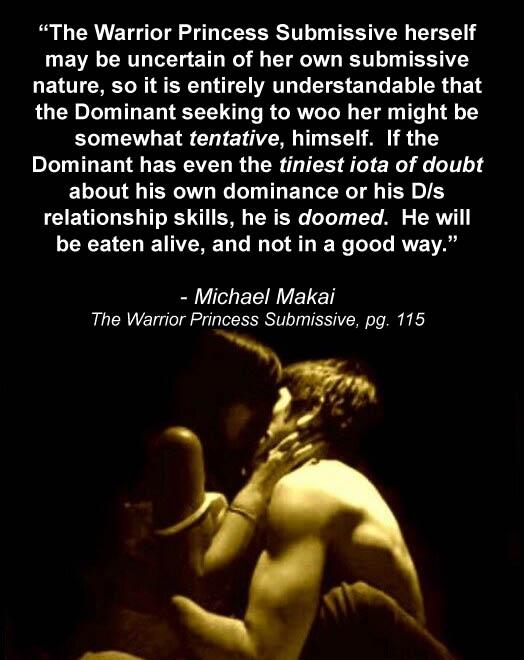 To which I responded:

@MikeMakai We all have doubts at some point, that’s human nature. It’s what we do in response to those doubts that makes the difference.

Unfortunately, the exchange ended there. Now this is not to call out Michael specifically, as I’m uncertain of the context of the quote and if there is more about a “doubting Dominant” elsewhere in his book, but the quote raised my red flag on what I perceive as the Myth of the Perfect Dom/Master. I also understand the art of romantic language and erotica that hypes the stereotypes and fantasies of the uber-powerful Master or Mistress who sweeps into the room, his/her very gaze commanding all submissive types to want to drop to their knees…

This is where I insert my Kyle(from South Park) quote: “Really? Really? REALLY?”

In the 50 Shades of Reality, aka Real Life that we live in, we’re human. We’re imperfect. I think a dangerous belief for someone who is coming into her or his power is to have this idea that they cannot make a mistake, they cannot have a doubt, or even several doubts and that they have to meet some level of perfection in order to attract a slave or submissive.

I remember having those thoughts back when I first started, that I was somehow supposed to jump into the relationship as the model of perfection, all decisions will be without mistake, and I would stride forth like the Dominant-Of-All. It really was confusing and difficult. It was even harder when the submissives I met had those same expectations – that if I made a mistake, that if I decided to reverse a decision, if I even communicated doubt to a submissive or slave,  it was somehow a marker of my ineptitude as a Dominant or Master.

I learned, the hard way, that these expectations were silly. And, for me, if a submissive or slave hinged her submission and/or surrender to a belief that I had to be God-like or perfect in every way, then we’re probably not suitable for a relationship. I find that to be unrealistic and unsustainable. What I have found to be respected and work with most submissives/slaves that I know is honesty, transparency and accountability. Having these values allows for me to be imperfect, to make mistakes, to have doubts without “being eaten alive.”

If I had any advice for a new Dominant/Master who read that above quote from the book, it would be this:

“Don’t worry about being perfect. Work on always being honest with yourself and your partner, being transparent as much as works for you and your relationship to make it successful, and being accountable for your actions.”

And for gods sake, avoid cannibalistic submissives/slave who eat Dominants. That’s some serious edge play that even I am not into…